A Little About Pure Chiropractic

Dr. Evelyn Hare
Dr. Evelyn Hare started her academic career at Memorial University of Newfoundland. There she studied philosophy under scholarship to obtain her bachelors degree. The concept of a consevative and drug free health care profession appealed to Dr. Hare and after careful consideration she decided to pursue a career in chiropractic. Dr. Hare completed her Doctor of Chiropractic degree at Palmer College of Chiropractic. At the same time as meeting the demanding program of a doctorate degree Dr. Hare managed to have two children. After two years working as an associate in London, UK, Dr. Hare founded two successful chiropractic practices, including one on world famous Harley St., where some of the best doctors in their fields practice. Now returned to Canada to be closer to family in Nanaimo, Drs. Evelyn and Jason Hare have established Pure Chiropractic. Dr. Evelyn Hare is not currently pracitcing or holding a license. She is the clinic director, ensuring that you have the best possible expericnce at Pure Chiropractic. 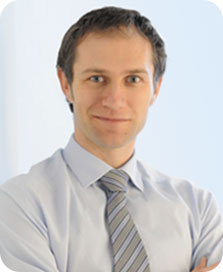 Dr. Jason Hare
Chiropractor Dr. Jason Hare began his university study with an undergraduate degree in Marine Biology at Memorial University of Newfoundland, specialising in marine mammals. Before becoming a chiropractor, Dr. Hare suffered from frequent headaches. Through chiropractic care, he was able to free himself of the debilitating pain. His personal experience with chiropractic inspires him daily to help others. Dr. Hare graduated with honours from Palmer College of Chiropractic in America, the first school of chiropractic. After completing his doctorate, he was invited to remain at Palmer to teach and pursue a Masters in Anatomy. From 2001-2009, Dr. Hare successfully practiced as a chiropractor in London, England. When not treating patients, Dr. Hare spends his time with his family and regularly competes in triathlons and open water distance swimming. In 1995 he placed second in the British Open Water Championships 3km event.

Check out photos of the clinic