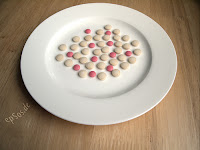 Hi All! I’ve been given the opportunity to write book on healthy living. It’ll be a long road ahead and I’ve set a goal to write a chapter a month. I will be blogging each installment as it is completed. Please feel free to critque it as you see fit and if you have any suggestions for what you would like to see included in the book I would love to hear them!

Sickness Care
Today’s healthcare isn’t health care at all. It’s sickness care. It waits for you to get sick and then it tries to treat it. If you doubt this, schedule an appointment with your family doctor. When he or she asks you what’s wrong with you, say “Nothing. I just want to be healthier.” Odds are, you’ll be ushered out of the office pretty quickly and you certainly won’t be any healthier.
Let’s take a closer look at our “healthcare.” Here in Canada, many of us mistakenly believe that we have free healthcare. Nothing could be further from the truth. Costs of the medical system are spiraling out of control at an alarming rate. A recent report from the Canadian Institute for Health Information showed that there was an inflation busting 7% increase in expense each and every year from 1998 to 2008. It was estimated that in 2012 costs ran $207 billion. This works out to an average of $5,948 spent on each Canadian citizen year on healthcare.
We’re taking more prescriptions, too. Research from the Center for Disease Control in the United States found that over a ten year period the number of people who took at least one prescription drug a month increased from 44% to 48%, those taking two or more drugs a month went from 25% to 31% and those taking 5 or more drugs increased from 6% to 11%. Most shockingly, a 2008 study found 1 out of every 5 children take at least one prescription drug a month!
Given all this money being spent on our healthcare, our health must certainly be improving, right? Sadly, this is not so. Obesity rates are skyrocketing. Thirty years ago, there might have been one or two children per class that were overweight. Now, 31% of school children are overweight or obese. Diabetes is also an epidemic. Up until recently, Type II diabetes was known as “adult onset diabetes.” It can no longer go by this term due to the number of children developing this life shortening disease. The number of Canadians diagnosed with hypertension shot from 12.9% to 19.6% in just eight years. Depression and anxiety levels have doubled in a decade. Autism is rising fast as well.
We’re spending more and more on healthcare yet we are just getting sicker and sicker. Clearly, the system isn’t working. We have to do something different before our great country becomes a bankrupt and perilously ill nation.
The lifespan dilemma
Inevitably, when I say that we, as a society, are sicker than ever before someone raises the question of lifespan: Why, if we are so ill, has lifespan gone up? It’s true, longevity has increased by 30 years or so in the past century alone. On paper, it appears our health is improving by leaps and bounds.
However, numbers can be misleading. One thing we have improved over the years is infant mortality rates. In the 1850’s, the American infant mortality rate was 216 deaths per 1000 births for white children and 340 deaths per 1000 births for African Americans. By 1970 the death rate had dropped to just 20 deaths per 1000 births. By 2003, that had reduced even further to 6.9 deaths per 1000 births. Medicine has played a major role in reducing this shocking loss of life. Yet big contributions to improving infant survival rates are down to simple practices such as improved hygiene, better diet, reduced smoking in expectant mothers, etc.
Let’s consider what a reduction in infant deaths does to our life expectancy. Let’s say the expected lifespan of a Country A is 70 years of age. Through medical intervention of drugs and surgery, the people of that country are able to survive for an average of 2 additional years, albeit with a poorer quality of life. We’ve increased the country’s life expectancy to 72. 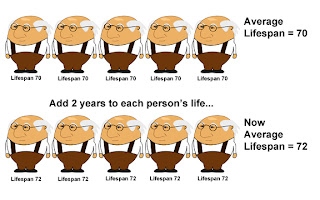 Now, let’s consider Country B where one in five babies die at birth. However, if you are able to escape infant mortality, you usually got to the ripe old age of 70. In that country, the life expectancy is just 56 as the average age is dragged down by the loss of infants.
Through better health practices and technology Country B was able to eliminate infant mortality. At the same time, they introduced the same medical interventions as Country A. Country B has increased its life expectancy by a whopping 16 years! 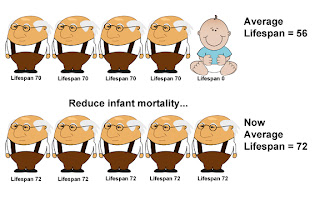 I think you can see, that if you want to make big increase in life expectancy you decrease the infant death rate. The truth is, people have always reached into their ninth, tenth and even eleventh decade. They just had to survive childhood first.
DNA is not destiny
We need to redefine how we think about health. I want to ask you to imagine a newborn baby. They are perfect in every way; so full of potential. No heart disease, no hypertension, no chronic illness of any sort. It is the definition of health. Why is it then, that we have been taught that it is our genetics that determines our health? I’m sure you’ve heard it before; “heart disease runs in the family,” “my diabetes comes from my mother’s side of the family.” This is a fatalistic concept of health.
Let me give you another example. Type 2 diabetes is a huge concern amongst Canada’s First Nations people. They have a rate of diabetes three to five times that of the general population. It is generally accepted that people of First Nations descent are genetically susceptible to the disease. The thought is that those people can’t help but develop diabetes. It’s their genetics, tragically doomed to develop this life threatening disease from the day they were born. Now, suspend this belief for a moment and consider the following: How many First Nations people had type 2 diabetes before European settlers arrived? The answer? None. Genetically, the First Nation population is much the same as it was 250 years ago. Why then, should we believe in their genetic susceptibility.
How often have you heard someone blame their weight issue on their metabolism, as if it were something out of their control, something they inherited? Our genetics haven’t changed appreciably over the last 50 years but obesity rates sure have.
This one might surprise you. When someone develops breast cancer, all women of the family are heavily encouraged to do monthly self-breast exams, as every woman should rightly do. This is done because they are lead to believe that breast cancer is largely genetic. In actuality, it is estimated that only 5% of all breast cancer cases are genetic.
We need to move away from the idea that our health, our lifespan and our fate are genetically determined. Our DNA is not our destiny. It is estimated that 80-90% of all health conditions are preventable. This includes heart disease, stroke, type two diabetes, and even many (if not most) types of cancer. It’s time to realize that you are the one truly in control of your health.
The solution: A true wellness model
This is where this book comes in.
I want you to be upstream of the sickness care model. I want to keep you well, so that you can stay out of the current medical model for as long as possible. Don’t get me wrong. I think the medical profession does a wonderful service, I just don’t think they help usbe healthy. They help us to survive. That’s why I’ve written this book. In the following chapters, I hope to give you the basic rules to living a healthy lifestyle.